I'm pretty sure Paganfest (America) will be my favorite show of the year - and it's only April! I have a real soft spot for folk/pagan metal, mainly because it is so fun to mosh to, and this show delivered a nonstop blast of rampaging folk metal with a great reaction from the crowd. This will also be a really long concert review, cause it was an immense show with eight bands. That's a mini festival right there.

Needless to say, what with the massive line-up causing things to start super early, we missed the first two bands, and only caught the last song of Yesterday's Saints. Although they've been on the line-up of several shows we've been to (including one where one of their guitars got stolen) this was the first time I actually got to see them. They were good, with kind of melodic riffs.

I was really looking forward to seeing Helsott, a folk metal band from California (yes, I was spreading lies when I mistakenly said they were from Texas). Their music has a heavy (ha,ha) thrash and death metal influence, and the songs I listened to ahead of time sounded full of intense, heavy energy. I thought it would be great to mosh to them, but I can't remember if I actually did (some social things were stressing me out and made it hard to pay attention at times during the show). I really enjoyed their set, though; their guitars were great. The vocals were too low, so I couldn't make them out most of the time (except the female vocals, provided by the keyboardist, which were a nice touch), but the guitars were amazing. I think at some point they even sounded a bit like hurdy gurdies, although that could just have been my imagination/being too obsessed with Eluveitie.

The next band was Trollfest, from Norway, who I was not looking forward to seeing at all. (It is almost impossible for me to dislike a European metal band, but this is one out of two that I outright dislike, the other being Vildhjarta.) I forced myself to listen to them ahead of time, and they sounded messy and discordant, something that does not appeal to me, being a fan of melodies and riffs. But they were better than I expected - they sounded much better live. Their sound was still very chaotic, and I was not a fan of the blaring saxophone, but the polka beat and melodies were difficult to resist. I would definitely have been in the pit if I had not been drinking. Actually, I did start a mini drunken jig with my friend K and crashed into some people. They came out all wearing bee antenna, and the singer was actually in an entire bee costume. As if their music wasn't silly enough.

I was also really looking forward to seeing Heidevolk, a Dutch folk metal band that I had fallen in love with while doing my pre-concert homework (that is, making a giant youtube playlist of all the bands that I then foist on my friends). Heidevolk sounded excellent. They started with "Nehalennia" and "Ostara," two songs I really wanted to hear. I fell in love with this band because of the rich, deep clean vocals, and Mark Bockting's voice sounded just as amazing live (though friends reported difficulty hearing it further back). At one point I was up in the second row, right in front of Mark Bockting - ahhh, it was amazing. Besides the vocals, the songs are kind of moderately paced with riffs that are all right, but not spectacular - just sort of generic metal riffs - but there was still a pretty good pit. I think I went in it a bit - definitely for "Vulgaris Magistralis." 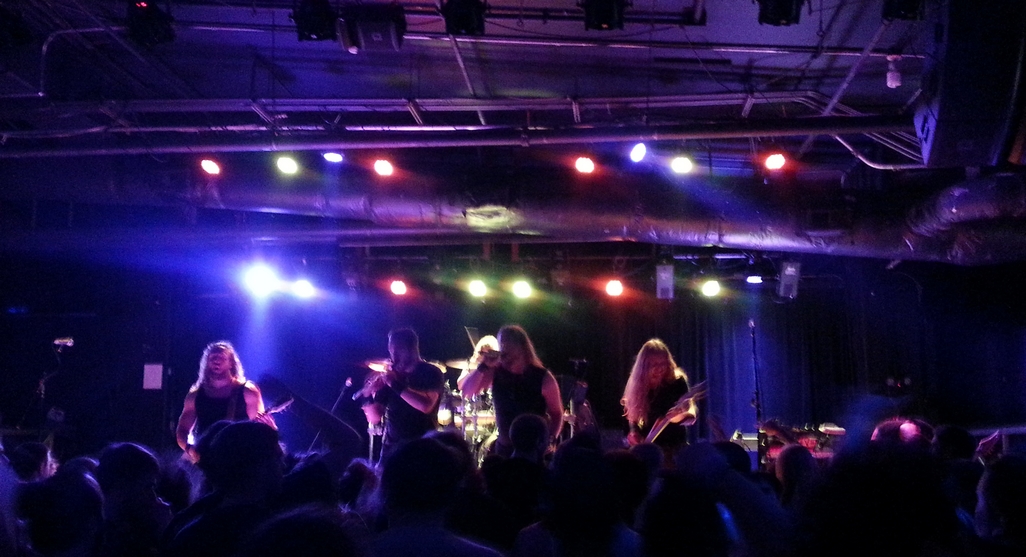 Heidevolk with their two vocalists. Photo by Steve Wass


I was not really looking forward to Tyr, in spite of their awesome reputation, because they were kind of lackluster the last time we saw them. But they were so much better this time - much more energetic, and with much better sound. They mainly played the faster paced fan favorites. I do enjoy their older, slightly doomy songs with chant-like vocals like "Ormurin Langi," but the newer slow song they played last time, "Evening Star," totally sucked the energy out the set. This time they kept the energy going. I was not feeling great during their set, but ran into the pit for the second song, "Tróndur í Gøtu," since it's my favorite Tyr song. They finished with "Hold the Heathen Hammer High," and I really regret that I was sort of having an anxiety attack and couldn't go in the pit.

Finally, Ensiferum topped off the night with a great performance. The riffs were epic and the harsh vocals commanding. They started with "In My Sword I Trust" from Unsung Heroes, which is a pretty catchy song. I was rather angry at the beginning of the set and as a consequence kind of aggressive in the pit at first (not cool, really :( ). There was lots of jigging, even to the more death metal like parts of their songs, and some really furious pits for the faster, more intense songs like "Ahti." They sounded very good. While doing my homework, I had watched a live Wacken video where the singer's voice started to give out, but there no such issues that night. I did wonder why the spoken parts, such as in "From Afar," were piped in - no one in the band could do those parts? And I guess the Finnish vocals on "Lai Lai Hei" were not as nice as on the album, but acceptable. I was terribly disappointed that they didn't play "Into Battle" -  I was really looking forward to the pit for that song. They did play a good mix of old and new, though, including songs like "Retribution Shall be Mine" that I don't think get much live play. Even if they are not innovative as they used to be, I'm glad to see they can still put on a great live show and play the old songs flawlessly.


Out of two Paganfests I've been to, this one was far the better. Every band sounded great and the crowd was energetic and folky for each band. A really solid evening.

S also wrote a review (although he falsely alleges that Ensiferum played "Treacherous Gods," which they most definitely did not - I would have had to be carried out of the venue after tearing up the pit if they had played that song!). He also posted a ton of photos.

Next concert: Death To All (Death tribute/charity benefit tour), tomorrow!
Posted by Tal at 12:06 AM